Written by on . Posted in Communicable diseases and immunisation, General population

Epidemiology in common countries of origin

Africa has the highest prevalence of schistosomiasis of any region, accounting for approximately 95% of affected people worldwide.113 Schistosomiasis is much less common in South East Asia, although it is prevalent in China (along the Yangtze River), the Philippines, parts of the Mekong River valley (Laos, Myanmar [Burma], Vietnam) and Indonesia. In the Middle East, there are residual foci of schistosomiasis in the Arabian Peninsula, including in Syria.

Table 6.1 shows a list of countries where schistosomiasis is endemic.

*These countries have had significant decreases in disease incidence due to WHO control programmes, but disease is still prevalent.

Many centres in Australia currently screen people from refugee-like backgrounds for schistosomiasis using serology and, in some cases, stool and urine testing. Most screening data come from African refugees, in whom schistosomiasis is common. Positive schistosomiasis serology has been found in 37% of African refugees arriving in Newcastle NSW,115 38% arriving in Hobart,116 and 12% in Melbourne.108 Fewer data are available on seropositivity in non-African refugees, with seropositivity in 9% (57/632) of Karen adults and 4.6% (23/504) in Karen children arriving in Melbourne,43 and 18% of 110 Asian refugees arriving in Darwin.39 These patients were part of population screening programmes for all new arrivals and thus are likely to be representative of the population as a whole.

In contrast to serological screening, screening based on stool microscopy is less sensitive and leads to a much lower rate of diagnosis. Western Australian data for all arrivals in 2003 and 2004, showed 3-7% of 1,633 African refugees had schistosome ova in stool, but none of 146 South East Asian refugees.41 Similarly, in a large study of 4,370 refugees arriving in Minnesota, USA, schistosomiasis was diagnosed on faecal specimens in 5.6% of African refugees but none from South East Asia.117

Schistosomiasis is a chronic disease that is generally asymptomatic until the late stages, when there is significant end-organ damage. Treatment is safe, simple and generally highly effective. The consequences of not diagnosing and treating chronic schistosomiasis range from none (in a light infection) to early mortality from portal hypertension, renal failure or bladder malignancy. There can also be substantial morbidity and long-term cost to health services as a result of intestinal polyposis, oesophageal varices, hydronephrosis, and urogenital fibrosis. Adult worms can live within venous plexuses for 20-30 years (mean 7 years) after the patient has left an endemic area. Thus, schistosomiasis meets all the usual criteria for health screening: available and effective diagnostic tests and treatment, a long asymptomatic phase, cure with early detection and treatment, and high prevalence.

Most infected individuals are asymptomatic and are therefore unlikely to seek treatment. Symptoms of chronic infection may include abdominal pain, bloody diarrhoea or cystitis/ haematuria, or rarely, genital sores. See ‘Management’ for evaluation of end-organ damage related to schistosomiasis.

Examination of stool and/or urine for ova is the ‘gold standard’ diagnostic method for schistosomiasis; however, ova will only be identified if there are multiple specimens submitted and there is a high burden of egg excretion.118 It is also logistically difficult and not cost-effective to collect and process multiple stool samples on an initial health assessment visit. For these reasons, serology is the recommended screening test, with stool and/or urine microscopy for schistosoma ova only in people with positive serology.

The reported sensitivity and specificity of serology varies with the method used.119 In general, modern methods are highly sensitive and specific. For example, the Institute for Clinical Pathology and Medical Research (ICPMR), the parasitology reference laboratory for New South Wales, uses an in-house ELISA with extracted egg antigens from S. mansoni. This technique has had excellent reported results in other centres, with sensitivity for chronic infection with S. mansoni of 93.3% and specificity of 98.2%.120 However, the sensitivity is not as good for non-mansoni species, with an estimated sensitivity of 90% for S. haematobium and 50% for S. japonicum and mekongi.121

Serology can remain positive after effective treatment, or after the infection has run its course. Thus it is a highly sensitive test (for African forms at least), but cannot reliably differentiate between current and past infection.114 Most people living in endemic areas are repeatedly infected due to bathing or washing in contaminated water sources until they leave the area or effective local control measures are put in place. This, combined with the fact that worms can survive for decades, means it is likely that the majority of people from schistosoma endemic areas with positive serology have current infection.

Schistosomiasis is a differential diagnosis for unexplained eosinophilia, and screening should be completed in people of refugee-like background with eosinophilia who have spent time in endemic areas.

Doctors and nurse practitioners can prescribe praziquantel for schistosomiasis through the PBS under streamlined authority arrangements. Each 600mg tablet can be readily divided into four, allowing dosages to be delivered to the nearest 150mg, or quarter of a tablet. Use Easidose to explain medication dosing.

The previous version of this124 and other guidelines recommended a higher dose of praziquantel (60mg/kg in 2-3 divided doses) for schistosomiasis acquired in Asia. However, this recommendation was based on very weak evidence, and a recent international randomised controlled trial (RCT) found that 40mg/kg resulted in comparable cure rates to 60mg/kg in patients with schistosomiasis from Africa, the Philippines and Brazil.125 Hence we recommend a uniform dose of 40mg/kg in two divided doses in all patients regardless of their area of origin.

Mild adverse effects occur with praziquantel in 5-30% of patients – these include nausea, dizziness, headache, diarrhoea and pruritus. Discuss potential side effects with patients.

These symptoms may be immune reactions to the dying worms rather than direct adverse effects of the drug.126 There is a theoretical concern of precipitating seizures in patients with neurocysticercosis (encysted Taenia solium parasites in the central nervous system). However this complication is very rare and it has not been reported in Australian refugee clinics to date. Routine cerebral imaging to exclude concurrent neurocysticercosis prior to praziquantel is not indicated. However, in a person with unexplained seizures, fundoscopy (for retinal lesions of neurocysticercosis) and cerebral imaging should be performed. Patients with possible neurocysticercosis should be referred to an ID specialist prior to praziquantel treatment.

If serology is positive, examine stool for schistosome ova. See flow chart (figure 6.1) for treatment and follow-up recommendations. This is not as a screening test, but as a risk-stratification tool, to detect patients with high worm burdens (in whom treatment failure is more likely with a single episode of treatment). Similarly, only people with positive serology and macro- or microscopic haematuria (using dipstick urinalysis) should have their urine tested for ova.

Patients with positive stool or urine microscopy for schistosome ova should have further follow up (see figure 6.1). This includes repeat stool or end urine microscopy to document cure, and evaluation for end-organ damage, including LFTs in those with positive stool microscopy. For S. mansoni infection, people with features of hepatic impairment should have imaging with liver ultrasound to exclude ‘pipe-stem’ fibrosis, a well-recognised complication of chronic S. mansoni infection. Features of liver impairment include: any history of chronic liver disease, ascites, gastrointestinal haemorrhage, chronic hepatitis B or C infection; examination findings of hepatomegaly, splenomegaly, ascites or peripheral oedema; or positive hepatitis B or C serology, thrombocytopaenia, low albumin or raised liver enzymes. If a patient has features of liver impairment, they should be referred to a specialist ID physician.

For S. haematobium infection, all patients with ova in urine should have a physical examination for genital disease and a renal tract ultrasound to exclude bladder and renal pathology. People with macroscopic haematuria, recurrent UTIs, abnormalities on imaging or genital disease should be referred to a urologist for consideration of cystoscopy and further follow up.

Do not repeat serology post treatment as this may stay positive for years.

Do confirm adherence to treatment as tablets and dosage are quite confusing and treatment may need to be re-explained (and re-prescribed if not taken the first time).

Children should be evaluated and treated as per the flow chart in the same way as adults (figure 6.1). Since the consequences of residual infection (e.g. growth delay, cognitive impairment) may be more significant in children, there should be a low threshold for referral to a paediatric ID specialist, especially if eosinophilia has not resolved and/or ova are still detectable in urine or stool after the first course of treatment. In addition, consultation with a specialist is recommended for children <4 years, as the safety and efficacy of praziquantel in this age group is not as well established,127 although praziquantel has been used in children as young as 12 months in mass eradication campaigns.

Praziquantel is a category B1 drug for use in pregnancy. There is controversy about whether women with asymptomatic schistosomiasis should be treated during pregnancy; however, there is a risk of loss to follow up if treatment is deferred until after pregnancy. There is emerging evidence about the safety of praziquantel in pregnancy 128 and no convincing evidence of teratogenicity. The WHO now recommends that pregnant women in endemic areas are included in mass treatment programmes. We recommend that praziquantel treatment for asymptomatic schistosomiasis is withheld during the first trimester, but either offered subsequently (after discussing the risks and benefits with the patient), or administered after delivery. There is no evidence of praziquantel causing harm to infants of breastfeeding mothers, and thus we also recommend that praziquantel treatment is offered to lactating mothers where indicated. 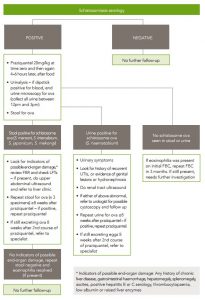 Trauma informed approaches to working with patients from refugee backgrounds

The Australian Refugee Health Practice Guide was produced with funds from the Australian Government Department of Health.

The information set out in the Australian Refugee Health Practice Guide (“the Guide”) is current at the date of first publication and is intended for use as a guide of a general nature only and may or may not be relevant to particular patients or circumstances. Nor is the Guide exhaustive of the subject matter. Persons implementing any recommendations contained in the Guide must exercise their own independent skill or judgement or seek appropriate professional advice relevant to their own particular circumstances when so doing. The statements or opinions that are expressed in the Guide reflect the views of the contributing authors and do not necessarily represent the views of the editors or Foundation House. Compliance with any recommendations cannot of itself guarantee discharge of the duty of care owed to patients and others coming into contact with the health professional and the premises from which the health professional operates.

Whilst the information is directed to health professionals possessing appropriate qualifications and skills in ascertaining and discharging their professional (including legal) duties, it is not to be regarded as clinical advice and, in particular, is no substitute for a full examination and consideration of medical history in reaching a diagnosis and treatment based on accepted clinical practices.